“an ambitious selection of works” 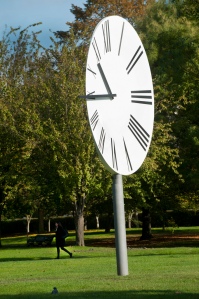 The Frieze Sculpture Park was successfully presented at Frieze Art London 2012. Packed with visitor, Frieze Art London 2012 confirmed to be the leading international contemporary fair. Many events and activities were associated to the fair programme, such as Film and Music, Talks, Outset/Frieze Art Fair Fund to Benefit the Tate Collection, Frieze Projects and the usual Frieze Stand Prize. The Frieze Foundation has also organized Education activities.

Lilley said of her selection: “I’m very pleased to be able to present such a rich and diverse range of sculptures by artists from across the generations. They indicate the multiplicity of contemporary sculpture, and the continuing desire to make work for the open air and in the public realm, offering the possibility of direct engagement with ideas, material and form. I have endeavoured to work with the landscaped gardens so that sculptures respond to their sites and viewpoints are taken into account. It is my hope that the sculptures will stop people in their tracks and

will encourage others to visit, that they will challenge and delight, punctuating the English Gardens and giving cause for thought, discussion and exchange. The Frieze London Sculpture Park offers an extraordinary opportunity to create a stimulating experience within one of the world’s most important art events and I’m delighted to make a contribution.”

Frieze London 2012 Sculpture Park is supported by yoox.com. Established in 2000 in Italy, yoox.com is the world’s leading virtual store for multi-brand fashion, design and art, offering a wide selection of products. Art at yoox.com offers a line-up of pieces and artists’ products perfect for avid and first-time collectors alike, alongside exclusive projects developed with some of the world’s leading artists. yoox.com is ‘Powered by YOOX Group.’