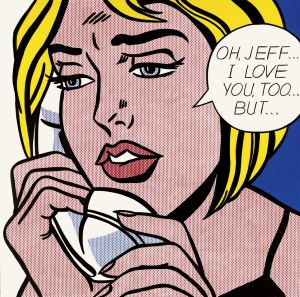 “Lichtenstein: a retrospective” closed with great success, at Tate Modern, London. The show was the most complete exhibition about Pop artist Roy Lichtenstein, spanning of his entire life.

The exhibition “Lichtenstein: a retrospective” brought together 125 of the artist more significant paintings and sculptures. The Tate Modern exhibition has been the major retrospective in twenty years.

Roy Lichtenstein was one of the central figures of American Pop Art movement. He introduced the concept of Pop and mass media culture into the art world. In the early 1960s he pioneered a new style of painting, executed by hand but inspired by industrial printing processes. He became renowned for works based on comic strips and advertising imagery, coloured with his signature hand-painted Benday dots.

The Tate Modern, London, exhibition displayed the Lichtenstein prosperous and open practice, represented by a wide range of materials, including paintings using Rowlux and steel, as well as sculptures in ceramic and brass and a selection of previously unseen drawings, collages and works on paper.

In early pop paintings such as “Look Mickey” (1961) and “Whaam!” (1963), Lichtenstein imitated the industrial techniques of comic books, using a palette of primary colours, heavy black outlines and Benday dots that simulated shadows and tonalities. The first work in particular apparently came from a challenge from one of his sons, who pointed to a Mickey Mouse comic book and said; “I bet you can’t paint as good as that, eh, Dad?”

This drastic new style, further developed in his later paintings, allowed him to reflect ironically upon the condition of painting in an age of mechanical reproduction and omnipresent mass media, and to portray what he described it as ‘a sort of anti-sensibility that pervades society’.

At the Tate Modern exhibition, in the first room, “Brushstrokes”, early works of Lichtenstein were displayed. These are usually seen as parodies of Abstract Expressionism, the overlooking USA art movement in the 1950s. Lichtenstein presented the brushstrokes as the result of a controlled act, differentiating himself from other artists such as Pollock or de Kooning.

The second room, “Early Pop”, was focused on the 1950s. Lichtenstein struggled with an abstract Expressionists style to find his own

identity as a painter, but by the end of that period, he started to experiment with cartoon imagery, immediately setting up a dichotomy between artistic form and popular commercial content. By 1961 he had begun to incorporate into his paintings imagery from popular culture, such as comic books and advertisements clipped from newspapers and telephone books. Here to highlight was “Look Mickey” (1961), which was a breakthrough for the 37 – year – old Lichtenstein and pave the way of his future. Based on an illustration from Donald Duck Lost and Found (1960), a Little Golden Book owned by Lichtenstein’s sons, it is considered his first pop paintings – though it was not exhibited in public until 1982.

In the third room, “Black and White”, there was a series of paintings of everyday functional objects made using black – and – white palette. Yet the sources he drew from for Tire (1962) and Ball of Twine (1963) were not the objects per se, but stark graphic renderings that he adopted from anonymous illustrations in newspapers and mail – order catalogues. Lichtenstein initially made his own stencils by drilling holes through strips of aluminium to apply dots on the painting. The inking was uneven and the small perforated screen had to be moved several times, resulting in blurring and other unintended marks. In 1962 he began to use larger, prefabricated Benday screens that enabled him to create more even and uniform patterns.

“War and Romance”, the fourth room, was about two subjects that made Lichtenstein famous and to which the artist turned, soon after New York dealer Leo Castelli started to represent him in 1961. These iconic pop paintings became an overnight success. However, they also provoked some virulent reactions in the cultural world. Based on comic books his war and romance paintings explored melodramatic stories and clichéd gender roles has disseminated through American mass media. Here highlights are “Drowning Girl” (1963) and “Whaam!” (1963).

The fifth room, “Landscapes / Seascapes”, started from a quote of Lichtenstein ‘relates to perception, not nature’. His series of “Landscapes” (1964 – 7), the placid emptiness and subtotal restraint of which work seems a far cry from the frenzied melodrama of the war and romance paintings, even if a couple of them, such as Sunrise 1965, are derived directly from the background of a comic strip frame. 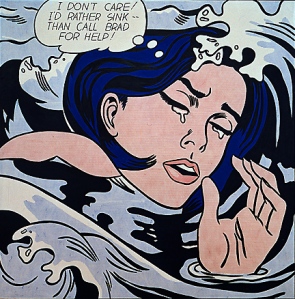 Room number 6, “Modern”, deals with New York City in the 1930s where Lichtenstein grew up. It was the peak of Art Deco, so the glossy lines and decorative panels of landmarks such as the Chrysler Building (1930) and the Empire State Building (1931) were familiar to him. When in 1966 he was commissioned to design a poster for the city’s Lincoln Center, he took inspiration from the old-fashioned 30 years old architectural style as the basis for his work. This was the starting point for a series of paintings and sculptures that he called his Modern series and that was derived from a design style. Here highlights were the brass sculptures “Modern Sculpture” (1967) and “Modern Sculpture with Velvet Rope” (1968).

The seventh room, “Art about Art”, was focused on the link Lichtenstein started to create with artists of the past, while working on contemporary art. Could be considered appropriation, stylisation or parody, but the works in this room, really were challenging art historical styles, or marking the paintings of great artists, for example in “Femme d’Alger” (1963) he translated Picasso’s “Women of Algiers” (1955). Lichtenstein stated ‘the things that I have apparently parodied I actually admire’.

Room 8, “Artist’s Studios”, presented of the same name series, which was painted by Lichtenstein in 1973-4. It is a four monumental pieces series, three of which were reunited at the Tate Modern exhibition for the first time since being shown in New York in 1974.

The ninth room, “Mirrors and Entablatures”, focused on a topic Lichtenstein much loved: the issues of vision and perception. In the late 1960s, he studied the pictorial conventions for representing mirrors and reflections in commercial catalogues. He also photographed real mirrors orientating them under different sources of lights to see the results differences. In ancient architecture, entablatures were used as a support and decorative band at the top of a column. However, Lichtenstein described them as ‘a Minimalist painting that has a Classical reference’.

In the tenth room, “Perfect/Imperfect”, was on display the series which is a rather unfamiliar group of works. This series explores the vocabulary of abstraction with geometric fields of colour that challenge the edges of the traditional canvas. The Perfect/Imperfect series was his most important work on abstraction. However, Lichtenstein stated it was a form of parody.

In the mid-1990s, Lichtenstein approached the nude, one of the most ancient genres of art, concentrating to the female subject in a 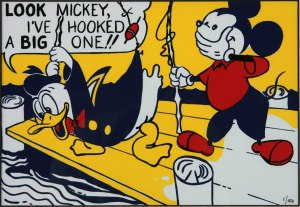 new and provocative way. In the room 11, “Late Nudes” highlights were “Nudes with Beach Ball” (1994) and “Blue Nudes” (1995). He did not employ live models for his depictions of the female body, but he used his archive of comic clippings to select female characters as the subjects – literally undressed them, by imagining their bodies under their clothes, before painting them as nude.

Brushstroke practice came back with new meanings by the end of the life of Lichtenstein, as it was displayed in the twelfth room, “From Alpha to Omega: Early Abstractions and Late Brushstrokes”. In 1996, in fact, he is started to produce an almost unknown series of small painting that he called ‘obliterating brushstrokes’.

In 1995 Lichtenstein returned to the landscape genre, creating more than 20 works in homage to the much stylised painting of the Song dynasty (960 – 1279 AD). In the last room, “Chinese Landscapes”, it could be seen the Lichtenstein fascination with the simplicity of Chinese art. On display there were pieces such as “Landscape with Boat” (1996), and “Landscape with Philosopher” (1996), the latter showing his commitment with a more complex system of applying dots to convey the atmospheric quality and subtle gradations of the original Chinese landscapes. In some paintings there are as many as 15 different sizes of dots.

Roy Lichtenstein has been one of the most important members of the Pop Art. He was born in New York (27th October 1923) from a wealthy Jewish family. During the school years, he started to engage with art, design and music. In 1940 he enrolled at the Ohio University to attend art courses. From 1943 to 1946 he served the USA army as orderly, draftsman, and artist. In 1946 he starts again university. In 1949, Lichtenstein received a Master of Fine Arts degree from the Ohio State University and, in the same year, married his first wife Isabel Wilson.

In 1951 Lichtenstein had his first solo show at the Carlebach Gallery, New York, and in the same year he moved to Cleveland, where he teaches art at the university, while working also as designer and decorator.

It was at this time that he adopted the Abstract Expressionism style and he began to employ characters, such as Mickey Mouse, Donald Duck or Bugs Bunny in his works, together with Benday dots, and also using cartoon images and techniques taken from advertising imagery suggesting consumerism.

In 1961, Leo Castelli started displaying Lichtenstein’s work at his gallery in New York, where the artist had his first one-man show in 1962; the entire collection was bought by influential collectors before the show even opened. Lichtenstein began to find fame worldwide. 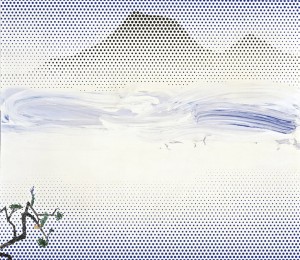 Landscape in Fog, 1996 © Courtesy of Estate of Roy Lichtenstein

In 1965 Lichtenstein divorced from his first wife. He married his second wife, Dorothy Herzka, in 1968.

In 1970, Lichtenstein purchased a former carriage house near the beach in Southampton, Long Island, New York, and built a studio on the property. He spent the rest of the 1970s in relative seclusion, but splitting his time between Manhattan and the house in Southampton.

He died of pneumonia in 1997 at New York University Medical Center, after several weeks of hospitalization. He was survived by his second wife, Dorothy Herzka, and by his sons, David and Mitchell, from his first marriage.

His works are held in major public collections around the world, including the Museum of Modern Art, New York; Museum Ludwig, Cologne and the Museum of Contemporary Art, Los Angeles.

“Lichtenstein: A Retrospective” was curated at Tate Modern by Sheena Wagstaff, Chairman of the Modern and Contemporary Art Department, The Metropolitan Museum of Art, New York, and Iria Candela, Assistant Curator, Tate Modern.

The exhibition opened at The Art Institute of Chicago in May 2012 and travels to The National Gallery of Art, Washington in October 2012 and the Centre Pompidou, Paris in July 2013.

Bank of America Merrill Lynch is global sponsor of the exhibition with additional support from the Terra Foundation for American Art, the Henry Luce Foundation and The Lichtenstein Exhibition Supporters Group.

“Lichtenstein: A Retrospective” exhibition has been on show at Tate Modern Gallery, London, from 21st February to 27th May 2013.