The Glamour of Italian Fashion at the V&A Museum, London.

The exhibition “The Glamour of Italian Fashion 1945-2014” closed with great success. It has been the first major show to analyse Italian rich and influential contribution to fashion during the second half of the last century.

During the II World War, the Italian fascist government used fashion to construct a sense of modern nationhood, relying on the millenarian national tradition – fashion clues can be found even in Etruscan and pre- Romans Italy.

The story of Italian fashion was explored through the pivotal individuals and organisations that have contributed to its reputation for quality and style, within the prevailing social and political context. On display there were around 100 ensembles and accessories by leading Italian fashion houses including Dolce & Gabbana, Giorgio Armani, Fendi, Gianfranco Ferré, Gucci, Missoni, Prada, Pucci and Versace, through to the next generation of talent including couture by Giambattista Valli, bold ready-to-wear from Fausto Puglisi and work from Valentino’s new designers duo Maria Grazia Chiuri and Pier Paolo Piccioli. It also highlighted the creativity of influential but less remembered figures such as post-war couturiers Sorelle Fontana (Fontana sisters) and Mila Schön and design innovators such as Walter Albini.

The exhibition The Glamour of Italian Fashion mapped the international perception of Italian style from the milestone Sala Bianca catwalk shows of the early 1950s, until contemporary momentum and with a look at the future.

The V&A Museum exhibition explored the post -war scenario in 1945. The Italian government intended to revive the ruined country. A big help arrived from the Marshall Plan. As clothing designers and manufacturer gradually resumed trading, their stylish designs responded to a hunger of glamour after years of wartime and fascist deprivation. For Italians luxury products were not affordable. But in the 1950s and 1960s prices get lower due to export.

In February 1951, Giovanni Battista Giorgini launched Italy’s first internationally recognised fashion show which took place in his own home in Firenze. At that time Paris was considered the capital of fashion. In 1952 he secured the use of the Sala Bianca an opulent gallery in Palazzo Pitti. Giorgini was able to pack together 83 press from all over the world and top Italian designers.

In the 1950s, numerous Hollywood films were shot on location in the studios of Cinecittà, a borough of Rome, including Roman

Holidays and Cleopatra. They put Italy in public eye. Italian fashion houses were associated with clientele of celebrities, and their shopping trips to Firenze or their holidays in Mali. Marcello Mastroianni’s trim suit in the film La Dolce Vita (1960) did much to popularise the Italian suit worldwide. A well-tailored suit requires precisely cut fabric and exact fit, along with fine finishing details. The smallest design elements, such as the shape of a pocket or sleeve, often differed from region to region. A Neapolitan suit could be distinguished from one produced in Rome.

Despite the many problems of the country, in 1970s Italian fashion blossomed. The popularity of the couture gave way to enthusiasm for manufactured fashion. By the 1980s, Milan became the Italy’s new fashion capital due to its fashion press, advertising industry and nearby clothing and textile factories.

The Glamour of Italian Fashion highlighted the exceptional quality of techniques, materials and expertise for which Italy has become renowned. Its status as manufacturer and exporter of some of the world’s most stylish and well-made fashion and textiles is linked to the strength of its traditional industries including spinning, dyeing, weaving, cutting and stitching. Some of these traditions have been practised in regions around Italy for hundreds of years. A digital map visualised the networks of mills, workshops and the clusters of related industries seen across the Italian landscape.

“Made in Italy” was born as a marketing campaign that celebrated a rainbow of finest goods: cinema, art, food, tourism, design, architecture and chief among them, fashion.

An interesting aspect of the Made in Italy was to remark Italian fashion knowledge of its talented use of leather and fur, which require great skill to be transformed into a garment or accessories.

By early 1970s, Milan had started to conceal both Florence and Rome as Italy’s fashion capital. A new figure emerged: the stilista. The Italian word is more widen then English terms designer or stylist. The Italian term refers to a mediator between industry, retail buyers, the public and the press. The stilista aims to create the perfect style, not the prefect outfit. The stilistas moved consumer to the ready –to –wear new fashion.

A series of video at the Glamour of Italian Fashion showed the relevance of the influential Distretti Produttivi, areas dedicated to special productions and in which the Italian territory was predominately organised. Particularly, Tuscany is associated with leather for its famous workshops and factories. Como considered the land of silk. Biella is the capital of wool and textile manufacturing hub. Prato centre for industry highly specialised in medical, sport and from production to sale management.

From 1970s and 1980s and beyond ready –to-wear was renewed. It became a point of strength of Made in Italy production. The Italian fashion export increased by the 300% to 1985.

The Made in Italy also promoted the knitwear system. Italy started during the 1950s to produce fashionable knitted garments. International buyers looked to Italy for its imaginative and stylish shapes. Between 1963 and 1965, export of Italian knitwear quadrupled. I personally remember my aunties having these knitting machines at home and providing items to industries. This fashion lasted for years and it was a big home based business for housewives.

Since the mid-1990s, fashion has become even more international. Many more Italian designers have become celebrities in their own right and solidified their country reputation of a global tastemaker. It started a cult of fashion designer, someone who sells a universe of goods across continents. Some have transformed long-established family firms into international luxury brand.

Italian designers and magazines have been particularly expert at creative collaboration with photographer, who have helped to crystallise the perception of Italian fashion over the past three decades.

Even if Italian reputation has suffered there is a limitless demand for Italian Style products. The years 2000s have posed great problems. The Italian network production is losing ground. What will Made in Italy mean in future? The filmed responses are taken from interviews with key protagonists from Italy’s fashion industry.

Their opinions advise what the future might look like. The video suggests the globalisation is a crucial event. Certification of production is more and more important allowing clients to recognised immediately Italian origins. Quality of production and goods are key elements. Another aspect is the ability of workers and their experience which si significant for a good quality production, especially regarding artisanal craftsmanship. There is a need of a wakeup call and a need of young designer. Also in Italy the laws are terrible and government does not support the business, but rather the opposite. Globalisation is important, customers are coming from abroad but also competitors are trying to imitate Italian fashion.

It is interesting to notice that in 1950s nearly 80% of the Italian wardrobes were handmade. It was a land of “sartine”, female – but not only- tailors who were making alterations, repairing and even producing clothes, including my mother, her aunt and my grand-grandmother. Widowed twice, the latter grown up a family of four by herself – in the 1920s, during the Fascism, in poor Italian countryside and without any social benefits – by doing tailoring. Glamour of Italian Fashion lacks a bit of this massive background, a real cradle of the sector.

The exhibition draws upon original researches undertaken within Italian archives. This is a critical point of Glamour of Italian 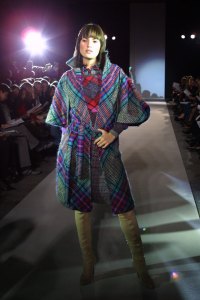 Fashion. Unfortunately, Italy business is largely based on black market work – in every sector – largely due to the big lacks of the tax and revenue laws. This cannot be found in archives. I can personally confirm, for the story of my family and from the ones of my friend and peers, many housewives had their little machine to produce knitwear. Or maybe they were working with knitting needles or crochet, or simply sewing. Nationwide companies based their fortune on this side of the business. The contribution of these women in terms of production, but also of design and fashion, is immense and many times companies took unfair profit of it. But, sadly, it cannot be found in archives.

The objects on display were drawn from the V&A’s leading Italian fashion collections and from international lenders. These included private foundations, fashion houses and archives such as the Fondazione Emilio Pucci, Foto Locchi, Missoni Archive and Museums including the Metropolitan Museum of Art (New York) and Galleria del Costume (Florence).

The exhibition curator was Sonnet Stanfill, curator of 20th century and contemporary fashion at the V&A. The exhibition designers were Urban Salon.

The exhibition sponsors were: Bulgari, Nespresso and the Blavatnik Family Foundation. Since 1884, Bulgari jewels have been an emblem of Italian creativity and craftsmanship. Bulgari is a global luxury brand, renowned for its distinctively Italian style, blending classicism and modernity. The Bulgari store in Rome (1905) has long been a favourite meeting place for international elite of artists, writers and actors. Bulgari has been part of the LVMH Group since 2011.

Nespresso is the pioneer and reference for highest-quality premium portioned coffee and operates in almost 60 countries with a global network of over 300 exclusive boutiques.

The Blavatnik Family Foundation is an active supporter of leading educational, scientific, cultural and charitable institutions in the United States, the United Kingdom and throughout the world.