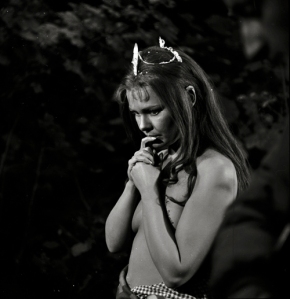 The “David Farrell” exhibition at the Osborne Samuel Gallery, London, was successful.

Farrell was a world well renowned photographer who died last year. His photograph of many of the greatest musicians, actors, authors, dancers and artists of the 20th century are considered icons. The exhibition was the first survey of Farrell’s work since his death. It will showcase images of many of his most famous sitters, from Louis Armstrong and Laurence Olivier, to Anthony Caro, Margot Fonteyn and the Rolling Stones, alongside documentary works depicting domestic life in Britain and anonymous street subjects.

Born in London, David Farrell (1919 – 2013) studied at Dulwich College and later trained at the Royal Academy of Music. Following a period of active service with the RAF during WW2, in 1946 he moved to Gloucestershire, where he became a central figure in a circle of intellectuals and artists including Lynn Chadwick, Jacob Bronowski and Peter Nichols.

Because of his increased family responsibilities, Farrell had to discard his ambitions to become a solo violinist. He turned to photography, securing a significant commission from the British Council to photograph a series of well-known artists including Henry Moore, Eduardo Paolozzi and Barbara Hepworth. These portraits established his reputation and attracted regular commissions for newspapers and magazines, and in 1955 he received his first music assignment to photograph Yehudi Menuhin and Sir Thomas Beecham at the Bath Festival.

Over the next 30 years, Farrell made many portraits of musicians and performers in informal situations, preferring to photograph them at home or in the studio rather than in public performance. He had a knack of being in the right place at the right time and his approach proved popular with his sitters.

Expanding his portfolio through commissions from London Weekend Television and Thames TV, Farrell went on to photograph most of the

pop stars of the period, including early performances by The Beatles, Cilla Black and Tom Jones. In the 1960s and 1970s he turned to theatre and film with an invitation to photograph the production of Peter Hall’s A Midsummer Night’s Dream (1968) starring Diana Rigg and Helen Mirren, and over subsequent years he worked on more than 100 films and TV dramas alongside directors including Michael Winner and Ken Loach.

Upon his death aged 93, Farrell left an extensive archive of images which together form fascinating “hall of fame” of the 20th century’s best-known stars of stage, screen and soundtrack. The exhibition at the Osborne Samuel Gallery celebrated and commemorated Farrell’s extraordinary legacy with of highlights drawn from across his remarkable five decade career.

The exhibition “David Farrell” was at the Osborne Samuel Gallery, Mayfair, London, from 1st until 20th September 2014.