The successful British Exhibition, at the London Burlesque Festival 2015.

The British Exhibition was a great event, at the London Burlesque Festival 2015, last 29th May.

Talking about Burlesque, it means to deal with a very typical British art and the London Festival 2015 had a great to organise the first ever exhibition in the UK. Therefore, it was surprising to hear that in the UK there is nothing about burlesque in terms of museum or exhibition. The cheeky child of the British culture has been neglected for years.

The organisers of the London Burlesque Festival realised that nothing in the UK documents burlesque, despite it is already almost 200 years old.

The word ‘burlesque’, in fact, was firstly used by Francesco Berni in the title of ‘Opere Burlesche’, of the early 16th century, that had circulated widely in manuscript before it was printed. For a time burlesque verses were known as poesie bernesca in his honour. ‘Burlesque’ as a literary term became widespread in 17th century Italy and France, and subsequently England, where it referred to a grotesque imitation of the dignified or pathetic.

It has been thanks to the London Burlesque Festival 2015 and its organizers, Chaz Royal and Bettie D’Light, together with Yak Droubie, that it was possible to see a retrospective of burlesque and how it has been born and then evolved in the UK.

They had all these materials, with which developed since 2012 The British Burlesque Museum, an idea curated by Chaz Royal. It narrates the history of Burlesque in Britain, with insightful knowledge and images seamlessly outlined, with collected artefacts.

For the British Exhibition a collection of memorabilia was on display. Any sort of items was showed, including magazines, posters, books, menu, and drawing, together with a video installation. There was also a much applauded act by renowned performer Ms. Whisky Falls, who is always present at the London Burlesque Festival.

The most interesting part was a series of panels about the history of British burlesque. The first ascertained proofs in the UK are to be found in the comic operas at the Gaiety Theatre in 1860s London.

Then the British Blondes troupes of Lydia Thompson (1868) arrived in New York, and they are credited to shift the focus of burlesque from comic sketches to deliberate female nudity. In England the office of Lord Chamberlain was responsible for censorship, and nudity was allowed on stage only if it was motionless and expressionless.

In the beginning of the20th century, Manhattan cradled the Ziegfeld Follies (1907) and the Minsky Brothers (1912), while Paris saw Josephine Baker and Anita Berber took place in Berlin.

Phyllis Dixey put on the first strip tease show in London in 1942. Another famed burlesque character was Jane, a famous comic strip created by Norman Pett, who had the habit to involuntarily lose her clothes and was inspired by burlesque performer Chrystabel Leighton – Porter (1913 – 2000).

The Latin Quarter was a lavish revue presented by Robert Nesbitt in Soho from 1949 to 1952 at the London Casino. Pamela Green was a famous British pin up in the 1950s and 60s and appeared in Peeping Tom film. In 1949, Le Folies Berger arrived to the UK in Birmingham, then moved to London and ended with a total of 2,000 acts. During the 1950s and 60s Murray’s Cabaret Club smashed the London arena, while Irving Strip Club (1956) was the only place where nude can move. Arthur Fox opened his revue bar in 1959 in Manchester and was celebrated for its talented stars performances.

However, the most eminent personality has been Paul Raymond, who dwarfed all others. He opened his Raymond Revue Bar in Walker’s Court, Soho that lasted until 1970s and was even used to film a sequence of Magical Mystery Tour movie of The Beatles. It was closed in 2004.

Today, this particular corner of Soho has been object of several attacks from the local council that wanted to close down all what remained of Paul Raymond history and wiped off the bohemian area. It is a moment of big changes, leading to a total and complete gentrification of Soho. Against this negative situation, there is also an ongoing campaign called Save Soho, supported by famous artists and personas, and even by Boris Johnson, the Mayor of London.

In 1968, finally The Theatre Act abolished the censorship on stage in the UK.

In the 1990s, the New Burlesque emerged, at the height of culture-bound vintage and is related to the dark cabaret. The new form encompasses a wider range of performance styles; neo-burlesque acts can range from anything from classic striptease to modern dance to theatrical mini-dramas to comedic mayhem. It has the common trait of pay tribute to one or more of burlesque’s previous manifestation.

The acts tend to put emphasis on style and are sexy rather than sexual. Usually, performers still strip down to pasties and g-string or merkin, the purpose is no longer solely sexual gratification for men but self-expression of the performer and, vicariously, the women in the audience. Another predominant aspect is the DIY and furthermore the striptease may be used to challenge sexual objectification, orientation, and other social taboos.

After the rediscovery in the US showbiz, burlesque has come back in Australia and in several European countries, inspiring many artists and musical contemporaries, including Madonna, Christina Aguilera and Gwen Stefani.

Real deus ex-machina of the London Burlesque Festival, Chaz Royal explains: “We’ve been collecting items and were involved in a book project in 2008 that helped bring attention to the history of British Burlesque, and thought the public and modern day Burlesque enthusiasts should be aware of the rich and diverse past of the art form, from its humble beginnings.” 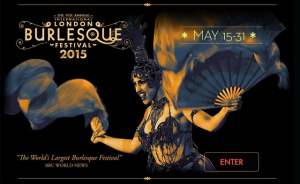 Meant to be a one stand exhibition, the British Exhibition it might be organised also for the London Burlesque Festival 2016, but it is not confirmed yet.

However, at the moment there are no plans to organise a museum or to find a gallery, where to display all the materials.

Located in various venues, the London Burlesque Festival 2015 was a successful series of sold out evenings. With almost 7,000 visitors sold and with around 188 performances, it is the world’s largest burlesque festival. The best artists in the genre have been chosen from more than 500 submissions coming worldwide.

At its 9th Annual Edition, London Burlesque Festival 2015 was running from 15th until 31st May and in its programme it was the first ever British Exhibition.