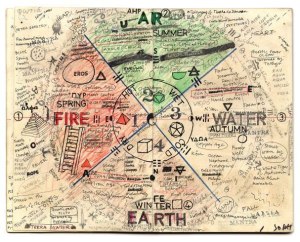 The ‘Notebooks’ exhibition of Joe Tilson at the Alan Cristea Gallery, London, is exquisite.

Spanning from 1970 to the present days, on display there are never before seen private notebooks, alongside related works by Tilson, at the Alan Cristea Gallery, London.

Born in London on 24th August 1928, British artist Joe Tilson RA is an earliest protagonist of the British Pop Art movement. A contemporary of Frank Auerbach, Leon Kosoff, he was strictly linked to Peter Blake, Allen Jones and Patrick Caulfield. Made of his own real private 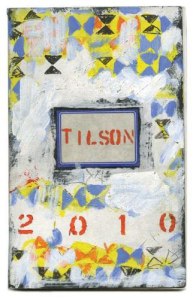 notebooks, this works provide a first-time look into the working methods and the philosophy of Tilson. These notebooks are full of his notes, lists, poetry, studies, drawings, photographs and his approach to art, literature and cultural history.

For almost 45 years Tilson has collaborated with Alan Cristea Gallery of London. He trained as a carpenter and completed his National Service in the 1940s. He attended St. Martin’s School of Art. In 1952, he continued his training at the Royal College of Art with Peter Blake, Allen Jones, Patrick Caulfield and David Hockney.

Tilson and his contemporaries were at the origin of British Pop Art movement, his own work always the most political of the group. While teaching in New York in the late 1960s, Tilson became very unhappy with the consumer society Pop Art emphasized. Also in the 1960s he was disappointed with the lack of political action in Britain. He moved from London to Wiltshire in the early 1970s and it is at this time the notebooks begin.

Some of these notebooks, together with annotated books from his own collection, are displayed next to prints that they directly refer to. Tilson is a liberal humanist and 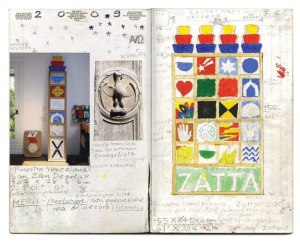 this can be seen on object exhibited: a complete record of where and what was going on, people met, places seen, poetry, and illustrations of works in progress, all mixed together with his personal thoughts.

By looking at his work, there are references to Greek and Roman mythologies and Italy, Venice and the countryside of Tuscany where he lived and worked, firstly in 1955, and where he met his wife. The work of Tilson, in fact, looks at intercultural evergreen themes. For example, there are texts and quotes from artists and writers, including James Joyce, Ezra Pound and W.B Yeats. Another interesting aspect is the constant use of the four elements and remarks of ecological matters through the representation of butterflies, birds and flowers.

The exhibition “Joe Tilson – Words and Images: The Notebooks” is at the Alan Cristea Gallery, Mayfair, London, from 21st March until 7th May 2016.