On display in the main space of Kristin Hjellegjerde Gallery London was the exhibition “Crinkled Escape Routes and Other Somewhat Flat Things” by Martine Poppe.

The Kristin Hjellegjerde Gallery’s exhibition came from a journey Martine Poppe made in the USA. The works on display were a melange of the practice of Poppe, pale and ephemeral, and the more realistic American rural landscapes. From images taken along the well-known Route 66, the works migrated from inner to outer elements by using symbols like landscapes or buffalo skull. It was a journey through the actual present and an ideally remembered past – for example, there were images but also real car pieces dispersed around the gallery.

The long named Poppe’s exhibition was an investigation of the relationship and distance between a completed piece of work and its original subject, while the artist explores new ways of creating. She said: “The subsequent fields of pixel-like marks open up spaces in which I make my decisions more apparent. I leave behind something open-ended and revealing on the surface.”

As with previous shows, Poppe has also integrated her blurred works with more figurative pieces in which part of the canvas is left exposed. By using taffeta for her figurative, she develops the materiality of her works so to contrast the blurred landscapes and to increase the sense of contemplative calm that prevails throughout the space.

The work of Martine Poppe can leave viewers in a slightly baffled mood while trying to understand her non figurative style. Martine Poppe explains: “As always my work is very conscious of its origins in photography. I’m developing the sense of meditative calm in the work, but also aiming to be more generous with my approach.” 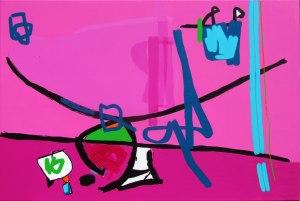 London. An abstract artist, he continues to explore the painted depiction of painterly codes. This new body of work on exhibition looks increasingly towards digital intervention, such as Photoshop, as a tool for the manipulation of these codes. Bradley explains: “Digitally modifying my scanned watercolours, removes them yet another step away from the immediacy of the original authorial mark.”

The result of his work is an exploration of gestural marks or codes from the history of Abstraction, but this is coloured by its digital pre-planning. Since moving to California, Bradley’s work has also seen a change in the choice of colours, which are now livelier, with different associations and compositions between them and with more movement.

Martine Poppe is born in Oslo, Norway (1988) but lives and works in London. From the Slade School of Fine Art, University College London, she received her BA Hons (2011) and MFA (2013) in Fine Art. She has exhibited extensively throughout Norway as well as London and the United States. Recent solo exhibitions include 50% Grå, Trafo Kunsthall, Norway (2015) and Anatidaephobia at Kristin Hjellegjerde Gallery, London (2014). Her recent group exhibitions include Sotheby’s inaugural exhibition S|2 x SF at their new S|2 space in San Francisco (2015), The Presence of Absence, Berloni Gallery, London, curated by Paul Carey-Kent (2015) and New Order II: British Art Today at Saatchi Gallery, London (2014). Poppe was the artist-in-residence at Hooper Projects, Los Angeles in the summer of 2015. She is the recipient of numerous scholarships and awards, having recently been chosen as a finalist for Contemporary Visions IV, Beers, London (2016) as well as having been shortlisted for the East London Painting Prize (2014) and the Threadneedle Prize (2013). Poppe’s work can be found in the collections of Saatchi, UCL, NRK (Norwegian Broadcasting Corporation) and University of Oxford.

William Bradley (born 1984, York, UK) graduated with a Masters degree in Fine Art: Painting from Wimbledon College of Art, University of the Arts London. He has been selected for numerous prizes such as FutureMap 08 and the Catlin Art Prize in both 2009 and 2011. His works are included in many renowned private collections throughout the United States, including the Hort Family Collection, and collections within Europe such as the Nelimarrka Museum, University of the Arts London and the David Roberts Arts Foundation. Solo exhibitions include I’ll Meet You There, Galerie Richard, New York (2016), The Black Paintings, Berloni, London (2015), Tall Tales, Galerie Richard, New York (2013) and Good Plan, EBandFlow, London (2012), among others. Recent group shows include S|2 x SF, Sotheby’s, San Francisco, California (2015), Work Hard, Play Hard (with Mark Selby), Berloni, London (2014) and Person, Place or Thing and Roster Crow, both at 68Projects, Berlin (2014). He was selected for the inaugural 68Projects/ Galerie Kornfeld residency in 2014 and was also an artist in residence at Hooper Projects in 2015. Bradley currently lives and works in London and Los Angeles.

The exhibitions “Crinkled Escape Routes and Other Somewhat Flat Things” by Martine Poppe and “Project Space: William Bradley” were at Kristin Hjellegjerde Gallery, London, from 6th May until 18th June 2016.