London – (following from part one.) The following room, ‘Osiris: from myth to festival’, focused on the Mysteries of Osiris, the most enigmatic of ancient religious ceremonies. The Osiris myth is the most elaborate and influential story in ancient Egyptian mythology. One of the most important and popular gods in ancient Egypt, he was the ruler of the underworld. Osiris with his sister-wife Isis, and their son Horus, formed a sacred family worshipped across Egypt and beyond.

The sky goddess Nut and the earth god Geb begot Osiris, Isis, Seth and Nephthys. Isis, goddess of love, loved Osiris since they were together in the womb. After birth, the two gods became pharaohs and civilised the world, while Seth and Nephthys got married together. One day Osiris was drunk and got Nephthys pregnant, so Seth decided to kill his brother. To cut a long story short, Isis could find the dead body of Osiris and got pregnant of him, generating Horus, who will kill his uncle Seth and then will become pharaoh.

Egyptians rarely wrote down the story of a sinister murder, because they believed that the magic contained in images and text could make it happen again. However, the story of Osiris was recorded by Greek historian Plutarch.

The Egyptian mythology starts from the god Atum, proceeded to his children Tefnut and Shu, who gave birth to Geb and Nut.

The following area, “Procession of the Nile”, focused on the annual celebration of the Mysteries of Osiris in Thonis- Heracleion and Canopus. The highlights of the event were two ritual processions. There is information about who were the most popular gods and the festivals dedicated to them.

One of the more inquisitive associations between Egyptian and Greek god is the one linking Osiris with Dionysus. Dionysus was identified in Rome with the god Bacchus (different, but similar to Dionysus), with Fufluns revered by the Etruscans and with the Italic goddess Liber Pater, and was nicknamed Lysios, “the one who loosens” the man of identity constraints staff for reunification with the universal originality.

The Greeks identified Osiris, the Egyptian god of the dead and afterlife, with Dionysus, their god of wine and intoxicated 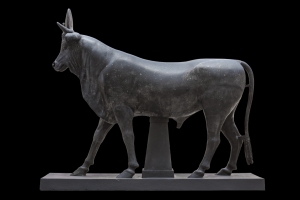 trance. The two gods both share common areas such fertility, in terms of sexuality but also related to agriculture and nature. Additional similarities are on the analogous myths of a double birth; their murder and consequent angrily dismembered body and scatters; the phallic imagery; and the ways to celebrate festivals.

The last room, ‘Egypt and Rome’, investigated how following the roman invasion, aspects of a merged Greek and Egyptian religion were exported across the Roman Empire. After Octavian (later the Roman Emperor, Augustus), captured Alexandria in 30BC, Egypt became a Roman province of strategic and economic importance. Ptolemaic rule has shaped a fusion of Greek and Egyptian culture and religion. There was an export of these aspects to the Roman Empire with new temples created in honour of Serapes and Isis, in Rome, Pompei and even London.

Gradually the Romans accepted the notion of divine kingship. In 130 AD, Antinous drowned during the Mysteries of Osiris in the Nile. He was the great lover of Emperor Hadrian who deified him as Osiris- Antinous and spread his worship throughout the Roman Empire. The death of Antinous remains a mystery to this day. Various hypotheses have been put forward, including he was killed intentionally. Certainly, the cult of Osiris- Antinous was the last relevant production of paganism.

Franck Goddio, President of Institut Européen d’Archéologie Sous-Marine (IEASM) and exhibition co-curator said “My team and I, as well as the Hilti Foundation, are delighted that the exhibition with discoveries from our underwater archaeological expeditions off the coast of Egypt is on display at the British Museum. It enables us to share with the public the results of years of work at the sunken cities and our fascination for ancient worlds and civilisations. Placing our discoveries alongside selected masterpieces from the collections of Egyptian museums, complemented by important objects from the British Museum, the exhibition presents unique insights into a fascinating period in history during which Egyptians and Greeks encountered each other on the shores of the Mediterranean.”

Supported by BP, the exhibition “Sunken cities: Egypt’s lost worlds” was organised with Hilti Foundation and the Institut Européen d’Archéologie Sous-Marine, in collaboration with the Ministry of Antiquities of the Arab Republic of Egypt.

The exhibition “Sunken cities: Egypt’s lost worlds” was at The British Museum, London, from 19th May until 27th November 2016.