“Michael Jackson: On The Wall” exhibition at the National Portrait Gallery, London. 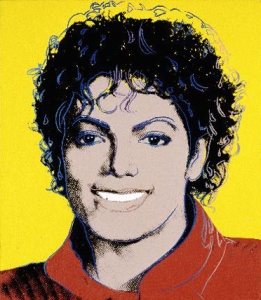 Michael Jackson still provides surprises. The landmark exhibition “Michael Jackson: On the Wall” at the National Portrait Gallery, London, confirmed that he still is a rich inspiration source for both art and non- artistic world.

Michael Jackson figure has been used in many different situations from publicity to history. However, the National Portrait Gallery explored the artist from the point of view of the art world. Curated by Dr Nicholas Cullinan, Director of the National Portrait Gallery, London, this major new exhibition spanned through different generations of artists across all media. On 29th August 2018, it was concurrent with what would have been Michael Jackson’s 60th birthday.

The National Portrait Gallery exhibition was a surprise for the many who never expected Michael Jackson to have inspired such large production of artworks.

Unpredictably, Michael Jackson evidences can be found in very different places, including that mom dressed like him on her way direction to school; statues made by Jeff Koons; a portrait of Andy Warhol; a patch on a teenager’s bag; or the cover of Rolling Stones magazine.

Jackson is one of the most influential cultural figures to come out of the 20th century and his legacy continues. His importance is widely acknowledged when it comes to music, music videos, dance, choreography and fashion, but his impact on contemporary art is an untold story; one that has not been recognised with an international loan exhibition such as this.

Almost a decade after his death, Jackson’s legacy is as strong as ever: his record sales, now in excess of one billion, continue to grow; his short films are still watched; and his enormous fan base remains loyal. His impact and fame show no signs of diminishing and the questions raised by him as a social phenomenon are still relevant.

Since last August, Michael Jackson lost his record for the most albums sold – The Eagles are the new top seller.

However, he won awards, philanthropic achievements and cultural barriers reversed. He has become the most depicted cultural figure in visual art by an astonishing assortment of leading contemporary artists since Andy Warhol first used his image in 1982. For the first time, “Michael Jackson: On the Wall” brings together the works of almost 50 of these artists, drawn from public and private collections around the world, including new works made especially for the exhibition.

The exhibition not only inquired why so many contemporary artists have been drawn to Jackson as a subject, but also why he continues to loom so large in our collective cultural imagination. It explored the impact and influence of Jackson on contemporary artists and the continued interest in him as a major cultural figure. The selection embraced works by some of the most important contemporary artists working today, but also includes emerging artists. This innovative exhibition is be accompanied by a scholarly publication with essays by Nicholas Cullinan, Margo Jefferson and Zadie Smith.

Dr Nicholas Cullinan, Director, National Portrait Gallery, London said: “Michael Jackson: On the Wall takes an entirely new and quite radical approach by exploring the cultural impact of a unique figure through contemporary art. All the artists included – despite coming from different generations and parts of the world, and employing a range of media – are fascinated by what Jackson represented and what he invented. It is rare that there is something new to say about someone so famous, but here that is the case. The exhibition breaks new ground for the National Portrait Gallery in its subject matter and the breadth and profile of the artists who have been invited to participate. It will open up new avenues for thinking about art and identity, encourage new dialogues between artists and invite audiences interested in popular culture and music to engage with contemporary art. Like its subject, we hope this exhibition will be inclusive in appeal, uncompromising in artistic integrity and in the process break down barriers.”

After London, the exhibition will tour to The Grand Palais, Paris (November 2018 to February 2019), The Bundeskunsthalle, Bonn (March to July 2019) and Espoo Museum of Modern Art, Finland (August to January 2020).

“Michael Jackson: On the Wall” has been at The National Portrait Gallery, London from 28th June until 21st October 2018.