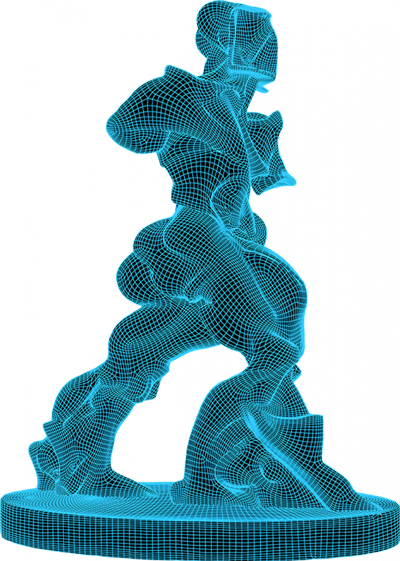 An interesting exhibition “Umberto Boccioni” at the Estorick Collection, London.

The London exhibition at the Estorick Collection is focused on the destruction (1927) of a number of plaster and mixed-media sculptures by the Futurist artist Umberto Boccioni. It was a tragic loss for the avant-garde and the entire art world. Of the many innovative sculptures he created between c.1913 and 1915, only a few survived today.

Digital artists Matt Smith and Anders Rådén have recreated four of Boccioni’s destroyed works: a volumetric study of a human face titled Empty and Full Abstracts of a Head, and three of the artist’s iconic striding figures. They used a combination of vintage photographic material and cutting-edge 3D printing techniques.

This landmark exhibition in London at the Estorick Collection of Modern Italian Art helps contemporary spectators to see these lost masterpieces for the very first time.

The interest of Boccioni in sculpture developed during the early part of 1912. He wrote: “Recently, I am obsessed with sculpture! I believe I have seen the means of achieving a complete renewal of this mummified art.” Later that year he published his ‘Technical Manifesto of Futurist Sculpture’, in which he called for the rejection of conventional materials such as marble and bronze. His best-known sculptures were created in a single material (plaster) and focused on the problem of how to capture movement in a static image – one of the key concerns of early Futurist art. However, his approach manifestly differed from that of his fellow Futurists by seeking to convey a fluid, intuitive experience of movement.

Boccioni’s best-known three-dimensional work is Unique Forms of Continuity in Space, the original plaster version of which belongs to the University of São Paulo’s Museum of Contemporary Art. One of the most instantly recognisable of all modernist sculptures, it appears on the Italian 20c euro coin. Dating from 1913, the work represents an aerodynamic figure – part man, part machine – racing energetically towards the brave new world envisioned by the Futurist movement. It was preceded by three sculptures on the same theme: Synthesis of Human Dynamism, Speeding Muscles and Spiral Expansion of Muscles in Movement.

Until now, remaining of these earlier works were a number of photographs taken in Boccioni’s studio and at three exhibitions around the world from 1913 to 1917. Accurate study and evaluation of these images has now allowed the making of really precise 3D reconstructions of the original works.

Boccioni died in 1916 in horse riding accident, and in 1927 the sculptures were destroyed by a family friend, the sculptor Piero da Verona. Fortunately 3 sculptures were salvaged from the broken pieces. However ‘Spiral Expansion of Muscles in Movement’ was beyond saving.

Moreover, to the full-size 3D prints, the exhibition presents smaller maquettes highlighting those areas where Rådén and Smith had to compensate for a lack of photographic documentation, drawing on the insights they had gained into Boccioni’s stylistic vocabulary in order to complete their reconstructions of the works. Time-lapse recordings of the printing and digital sculpting processes are also integrated, together with sketches and working drawings for the final prints.

The exhibition “Umberto Boccioni: Recreating the Lost Sculptures” is on show at the Estorick Collection, London, from 25 September to 22 December 2019.