London – (This article re- edited on 16/0/2018) It was an interesting exhibition “Now” by Jeff Koons at the Newport Street Gallery of Damien Hirst.

The Newport Street Gallery is a new exhibition space from Damien Hirst who decided to organise his second show with Jeff Koons. Nowadays, they probably are the most paid artists in the world. However, Hirst has been a fan of Koons since first seeing its work at the Saatchi Gallery whilst he was at the university in the late 1980s.

The show was called “Now” because the work of Koons always has been focused on the present: about what is happening today. Of course, pieces made years ago are on time for that past period, not for today. For example, those Hoovers, most of the readymade objects were made in the 1980s and they have a taste of that time.

The displayed objects are coming from the personal collection of Hirst. They were chosen to best reflect the career of Koons for this solo exhibition and many of them are firstly exhibited in the UK. ‘Now’ was the first major UK exhibition to be devoted to the artist since ‘Jeff Koons: Popeye Series’, at the Serpentine Gallery (2009). Spanning thirty-five years of the artist’s extraordinary career, ‘Now’ features thirty six paintings, works on paper and sculptures dating from 1979 to 2014.

The Newport Street Gallery exhibition displayed one of the first works of Koons, ‘Inflatable Flowers (Short White, Tall Purple)’ (1979), a vinyl blow-up flower put on view on a mirrored floor tile – suggesting one of the most repeated artist topic, the inflatable. There were a number of his iconic wall-mounted Hoover sculptures, part of The New series (1980–1983), in which immaculate, unused household appliances are displayed in fluorescent-lit, acrylic boxes, dated from Koons’s time working as a Wall Street commodities broker. Two of the Hoovers, which remain eternally pristine despite being outdated, were included in Koons’s first solo exhibition, at New York’s New Museum in 1980. Part of that installation – originally displayed in the museum’s storefront windows – has been reassembled for this exhibition. For the artist, the readymade, whether in the form of a child’s toy, Baroque sculpture or advertising billboard, provides “the most objective statement possible”.

This exhibtion is Damien Hirst’s homage to the artist who has influenced him most. Generally speaking, Jeff Koons is considered to be one of the most important artists of the post-war era. Since the late 1970s, his assorted practice has investigated themes related to taste, consumerism, mass culture, beauty, acceptance, and the role of the artist.

Some critics, however, disagree with that point of view. They do not accept in Koons’s work there is irony and that he represents the silliness of the world we live in. Koons was even put alongside D. J. Trump, because he transformed his art into business.

Probably, a god approach should be adopted from the Romans proverb ‘In medio stat virtus’, which can be 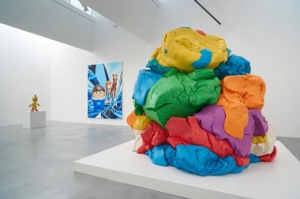 translated in English with ‘In the middle stands virtue’. Koons, in fact, seems to have commercialised his undeniable aesthetic. The craft ability of Koons is another pro, and the materials used are of quality, but maybe at the Newport Street Gallery those big spaces are not so convenient to give the right degree of emotion.

The exhibition explored the innate talent of Koons to mesmerize and to provoke. Employing easily-identified images, he investigated social mobility in the Equilibrium Nike posters, the ways alcohol is advertised to diverse demographics in Luxury and Degradation, and the evocative imagery of childhood toys represented in Celebration.

Jeff Koons was born in York, Pennsylvania, on 21st January 1955. He studied at the Maryland Institute College of Art in Baltimore and the School of the Art Institute of Chicago. He received a BFA from the Maryland Institute College of Art in 1976. Since his first solo exhibition in 1980, Koons’s work has been shown in major galleries and institutions throughout the world. A full survey of Koons’s career was the subject of a major exhibition at the Whitney Museum of American Art in New York, which travelled to the Centre Pompidou in Paris and to the Guggenheim Museum Bilbao. Koons lives and works in New York City.

Newport Street Gallery opened in Vauxhall, south London, in October 2015. Spanning five buildings, the gallery presents solo or group exhibitions of work drawn from Damien Hirst’s extensive art collection, which he has been building since the late 1980s.

Co -curated by Damien Hirst and Jeff Koons, the exhibition “Now” was at the Newport Street Gallery, London, from 18th May until 16th October 2016.